“What do you do when you get bitten by a snake?” I asked Sam. We looked at each other in astounded by what had just happened. We’d both seen it so I definitely wasn’t dreaming. I’d climbed over a wire fence beside the A171 just south of Whitby having crossed a (for once dry) moor covered in purple heather and in doing so landed upon an adder. I felt a sharp sting in my ankle, as if I’d been stung by a roided up wasp or some sort of super-nettle that had been carefully cross-bred by a mad horticulturalist. I shouted out in pain and looked down to find what had caused the fast jolt of pain up my left leg. And there he was, hissing angrily. And then he was gone, never to be seen again.

Chris has sensibly walked to extra 200metres or so to find the gate rather than crossing the fence, rather sensibly, and after Sam saw what happened to those who dare to defy the clear demarcation of said fence, he opted to go the long way round. I crossed over the road, sat myself down and began inspecting the wound whilst the other made the way. Two tiny spots of blood. Not really much to write home about, and not altogether painful. But I knew adders were venomous and are potentially even lethal. Even if it was incredibly unlikely I thought I’d better give the old NHS a quick call to check what I should do. This is roughly how it went.

‘Sorry, did you say snake?’

I got the feeling that this doesn’t happen particularly often in the UK. Another voice came over the phone.

‘Are you sure it was a Snake?’

The call went on like this for a while, and trying to establish where I was exactly to the operator took some time. I was told that I’d have to go to hospital as they may need to give me a dose of anti-venom.

An ambulance arrived shortly after and I was promptly laid down and hooked up to heart rate monitors and the thingy that measures your blood pressure (which I’ve just learned are called sphygmomanometers), and other bits of machinery that ‘go beep’. 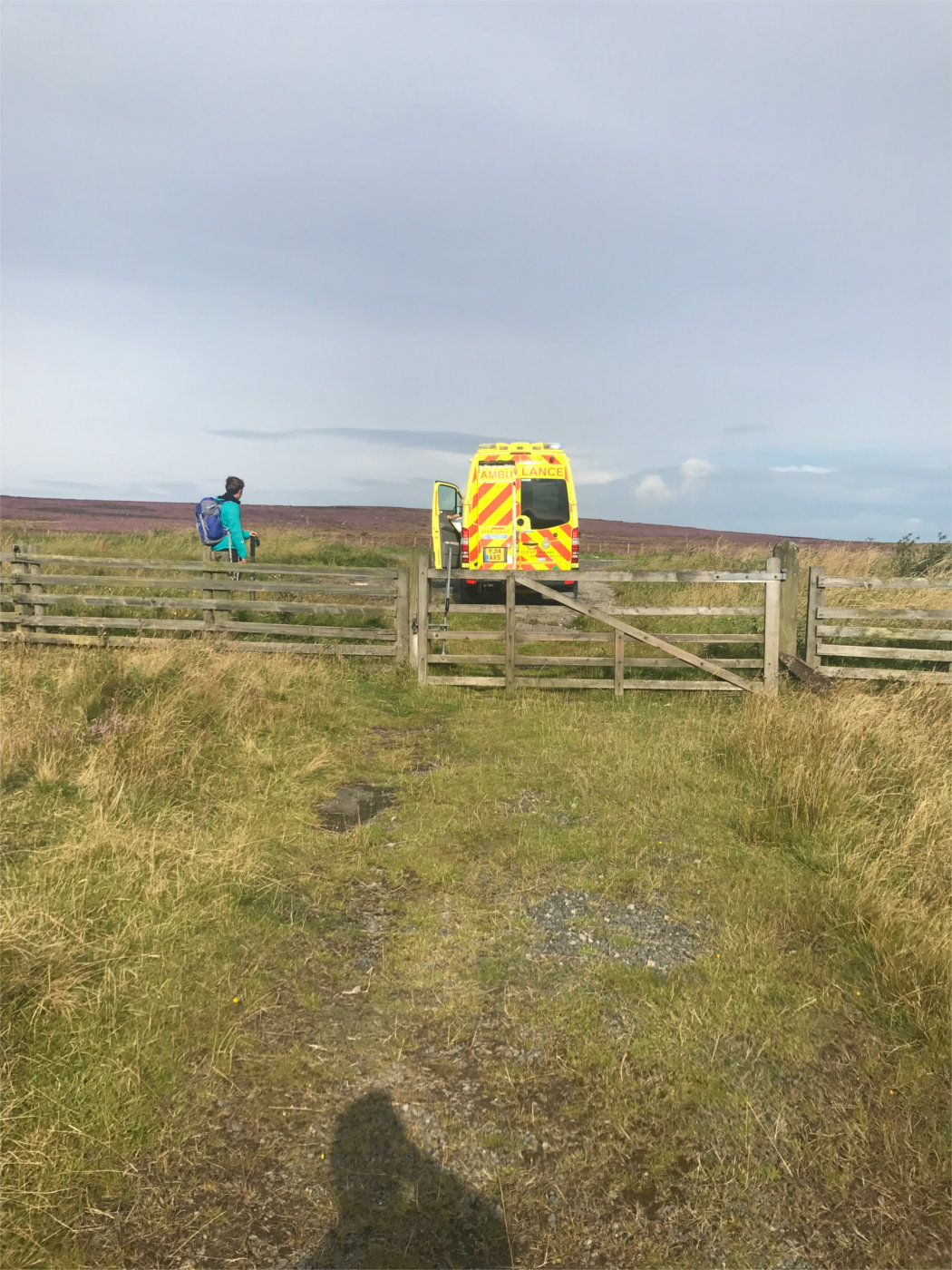 It took a while for the ambulance to get going as they needed to phone around the local hospitals and infirmaries to see if anyone had any anti-venom knocking about. I was imagining a dusty vial in the back of some cupboard somewhere being found by the person on the phone to the paramedics:

Middlesbrough was out but Scarborough General had some in stock. I told the boys to go on without me and not waste a day sitting around in a hospital, the ambulance doors slammed and off we went. 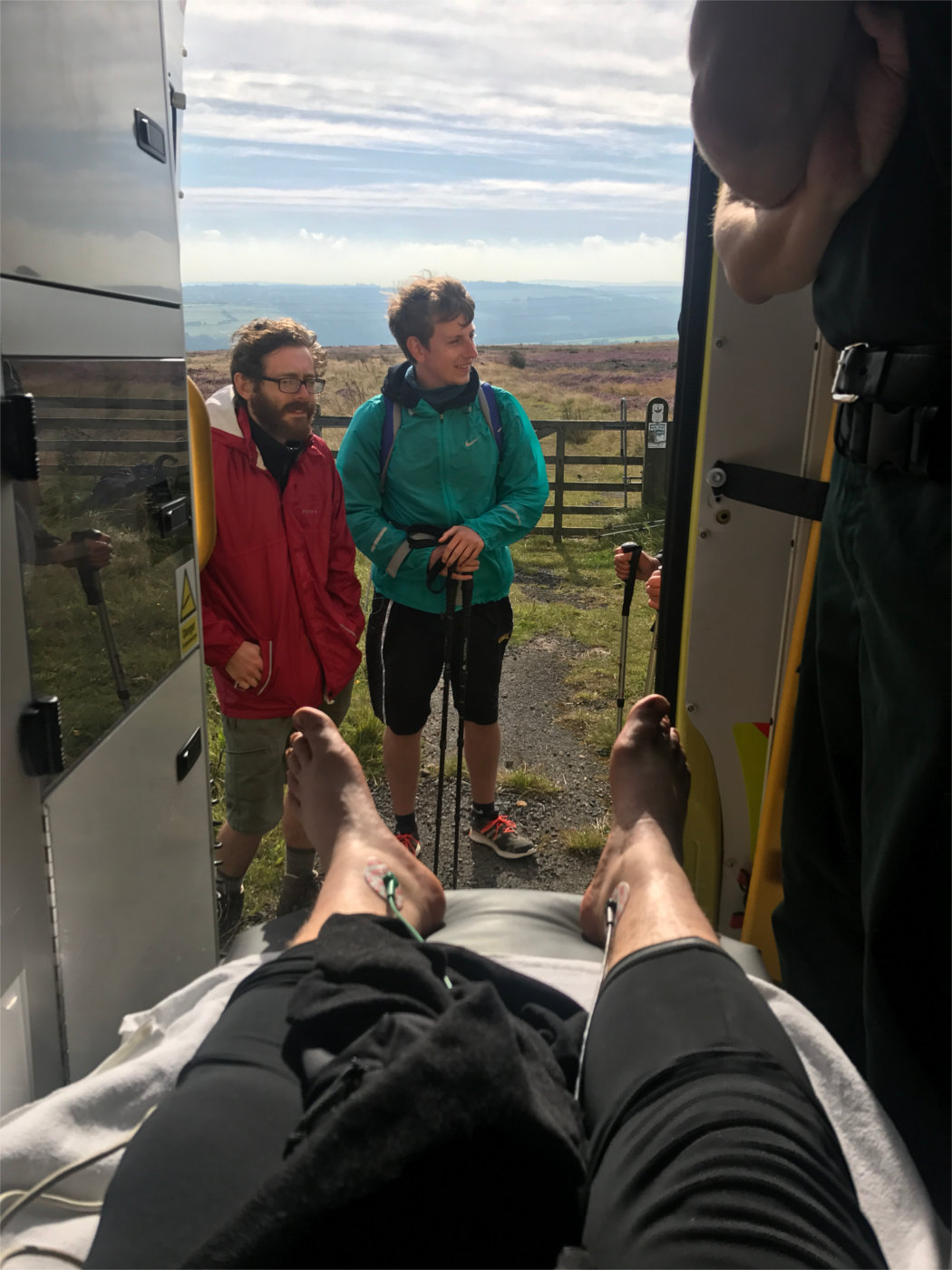 The previous two days of walking had taken us from Danby Wiske and into the North York Moors. We set off slowly in the morning and had lunch in a village called Ingleby Arncliffe, we saw a few of our fellow coast to coasters from the night before in the pub as well as the local WI darts team, who were amazingly bad at darts but looked like they were having a great time putting holes in the wall. And floor. And ceiling. From there the path began to ascend to the higher plateaus of the moors, we took a shortcut through the woods and soon emerged at the top in a landscape of purple heather and boulders, and well constructed paths paved with large flagstones. To the north we were treated to incredible panoramic views that stretched out over mile after mile of farmland and villages all the way to the industrial skyline of Middlesborough looking a little bit like a good-weather version of Blade Runner (sans plumes of flames shooting into the sky).

We wild-camped that night at a picnic area that was at one of the viewpoints on the edge of the moors. There was a mountain rescue team there on a training exercise and plenty of cars but we’d been on the road long enough by this point to realise that 99% of people really don’t care if they see you camping where you’re not supposed to. We clearly weren’t going to be any trouble. 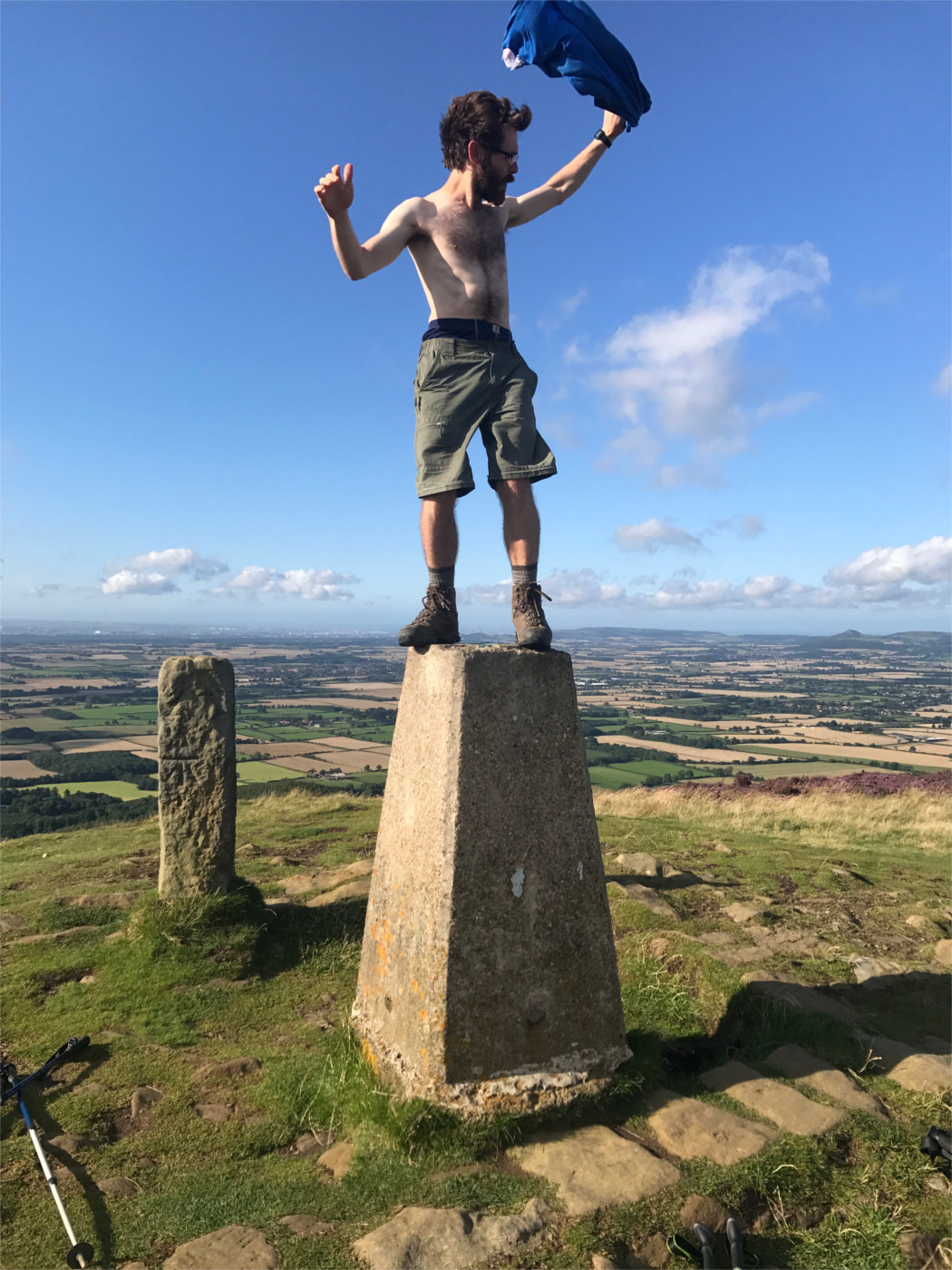 As we set off the next morning we passed two guys, both in the 6 - 7 foot height range who looked like they were waiting for someone. They sized us up as we walked passed. We were taking it slow that morning and eventually the pair, now accompanied by a third person, marched past us, no doubt feeling a little smug. We were heading for the popular midday resting spot at the Lion Inn at Blakey Ridge. If you follow the coast to coast that Wainright suggests there’s a sneaky shortcut to get the pub that shaves off about a mile of unnecessary walking. Our lanky friends who overtook us earlier looked very surprised when they arrived at the pub to find us sat with pints of beer already half emptied. 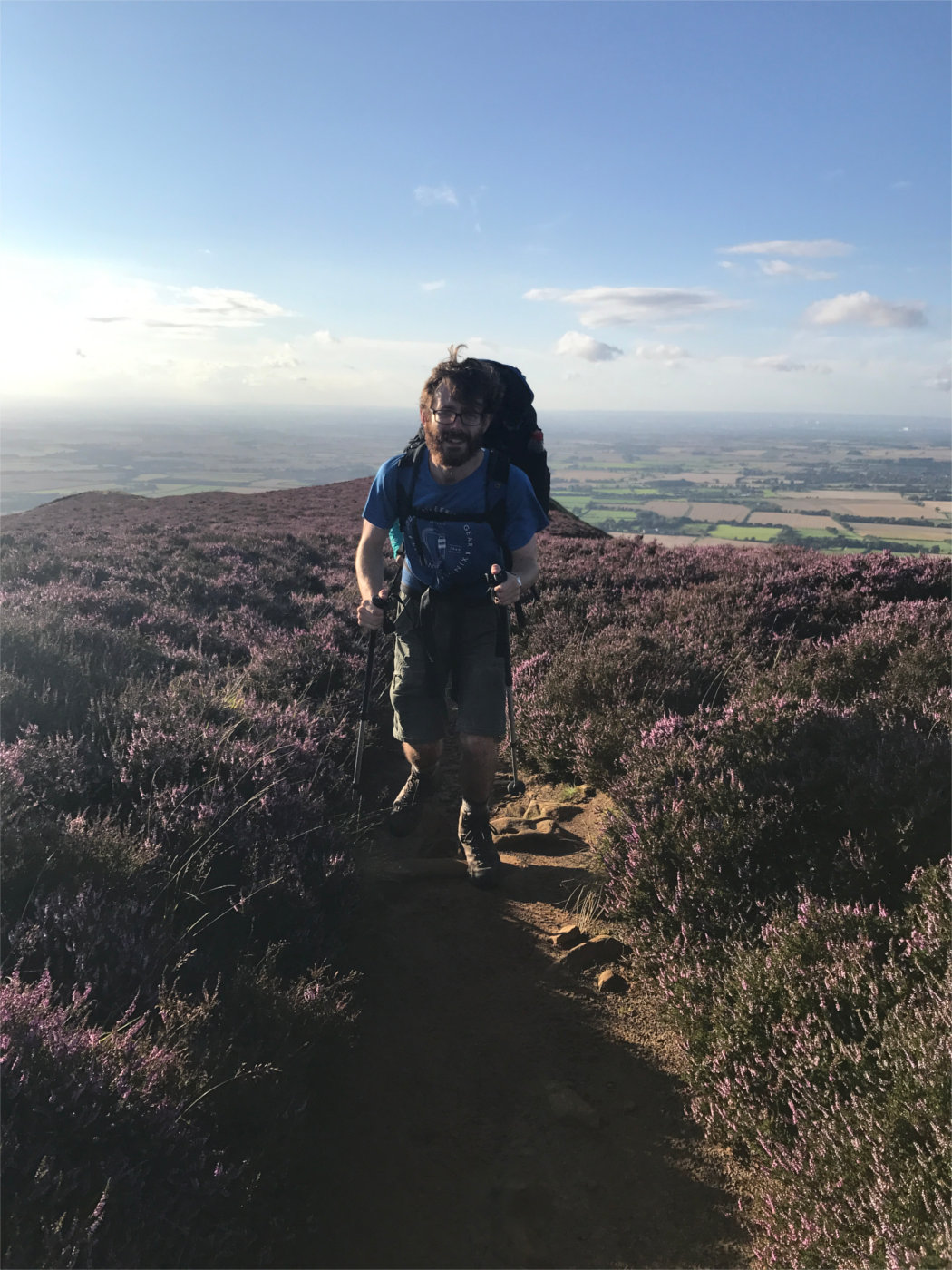 We carried on walking. More Moors. We stopped eventually in Glaisdale for yet more pub food. Once again we met our tall competitors who walked in shortly after us.

‘Finished for the day already lads?’ one of them asked. He continued.

‘We’ve still got another few miles in us yet. Reckon we’ll keep going tonight to Egmont Bridge.’

It was time to lay some truths on these suckers.

‘So where are you staying tonight?’ I asked.

I asked him about where we’d seen them earlier in the day:

‘Did you camp near where we saw you this morning?’

‘Huh, must have been a long walk to get to where we saw you then?’ knowing full well that the nearest B&B’s where not in anyway near to where we’d spotted them.

‘Not from the packhorse I hope!’ Knowing full well that they had been getting their gear lugged about form them by the packhorse minivans having seem them loading up gear with them at Lion Inn. They looked around sheepishly.

At this the proverbial mic was firmly dropped. I’m not a big fan of these petty competitions that amount to little more than measurements of manhood but I took great satisfaction in demonstrating that although they had us pegged when it came to speed, we’d carried all of our gear and had camped almost every night of our trip and had certainly not hitched a ride with anyone at any point. 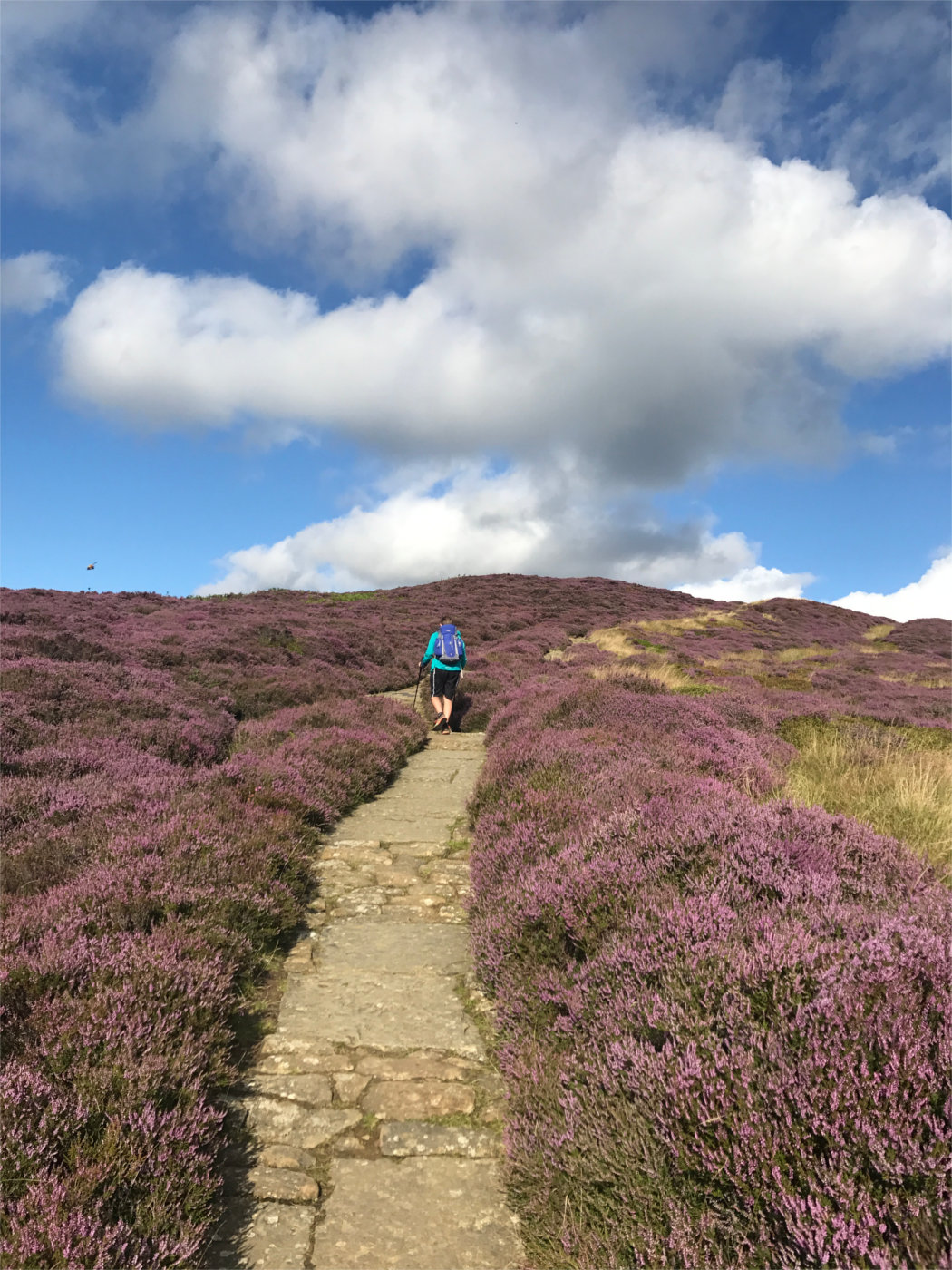 The next day we set out on what was supposed to be the final day of our Coast to Coast. We caught the occasional exciting glimpses of the sea and of the Whitby Abbey. But for me it wasn’t to be, the fellowship was split up and as Sam and Chris trudged the last steps to Robin Hood’s Bay and finished the walk I went to Scarborough. My symptoms fortunately didn’t get bad enough to warrant giving me the anti-venom and I was released after 12 hours in the acute observation ward. I arrived at the YHA at Whitby at dusk, the sun setting over the North Sea and draping the hard black edges of the gothic arches of the Abbey in ribbons of orange and gold light. The next morning I returned to the spot where the ambulance had picked me up and marched out the last 5 miles with a slightly sore and swollen leg. 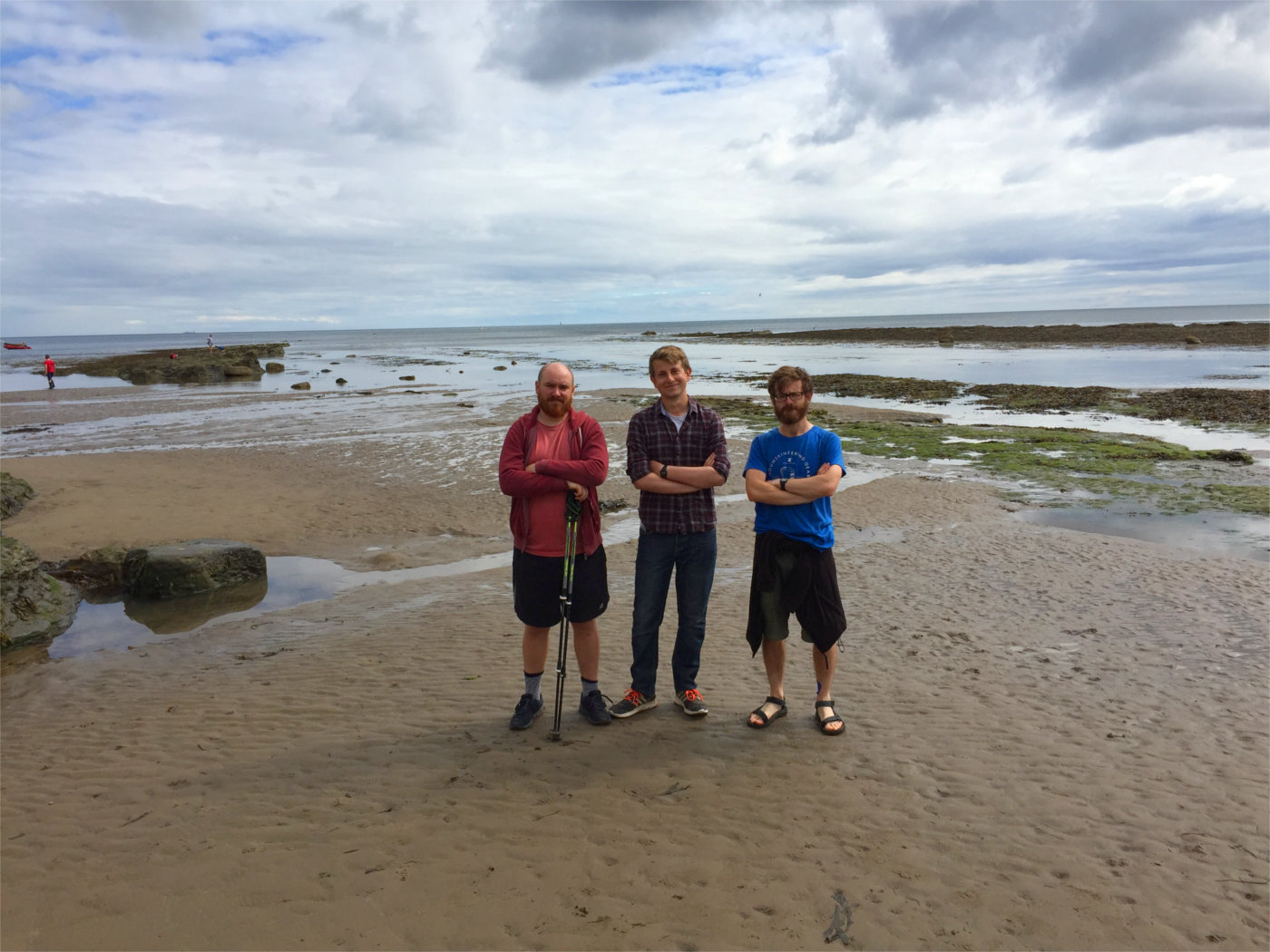 I was eager to see the end and found myself in Robin Hood’s Bay much sooner than I had expected. I walked into the North Sea at the end of the slipway, letting the water into the tops of my shoes, and in that uneventful moment it was done. I think I’d expected some sort of feeling in that instance, like awe, or of pride, or of joy, but really it felt anti-climatic and little bit nothingy. I sat myself by the Bay Hotel and took stock of what I’d achieved, hoping for some sort of euphoria to kick in and waiting for the others to arrive. But I suppose this journey was never about the destination, the end was no more important than any other point, it was less that I had arrived somewhere but more that I had finished something. Perhaps I felt a little disappointed in the end to reach the end, I had just started to become accustomed to life on the trail just at the moment that it was over. The other arrived, and immediately I felt a lot better seeing them again. We posed for a few celebratory photos, got the obligatory excellent fish and chips, and set off home thinking of what the next adventure will be.